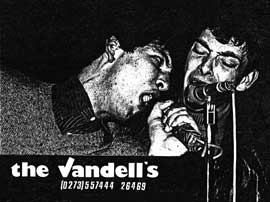 • The Vandells morphed out of the Depressions, who in 1977 were Brighton's top punk band. They wrote some catchy songs to coiincide with the Mod Revival at the time Quadrophenia was filmed in Brighton

• Wherever you see this button throughout the site, just click to access the free mp3 download page. Some band pages also have an existing short audio loop.

• Watch punkdaddy's interview with the BBC